Former transport minister for London Steven Norris has told operators that green hydrogen is key to the industry’s drive towards zero-emission vehicles but that the government’s target for HGVs is “likely to be altered”.

In a wide-ranging presentation during the annual FORS Conference at the Manchester Central Convention Complex, Norris said the key to decarbonising was “setting a date that’s realistic” and that work on the heavy truck sector has so far seen “limited progress”.

A former director general of the RHA, Norris admitted that the euro emission standards programme had delivered on time but the switch to net zero posed different challenges: “Promises of doing things in 15-20 years time are frankly easily made,” he added. “You‘re in the knowledge that you won’t be around to deliver.”

He went on to echo industry fears that battery size was still prohibitive for electric HGVs and said “the thing about CNG is that it’s not green”.

However, he identified Tevva as a strong future contender in the EV market: “They’re producing a 7.5-tonne truck with a payload of 3,000kg which will be on the market in Q3. It’s very impressive and will fill a gap.” he said. “It has a range of 220 miles but they’re fitting a hydrogen range extender to get over range anxiety. So there’s progress but we’re a long, long way from efficient 38-tonne trucks.

“I’ve yet to see any evidence of carbon capture and storage that works at scale,” he concluded. “Natural gas is nothing like the answer we need. So we need to look at a concept that’s really gaining attention and that is green hydrogen.” 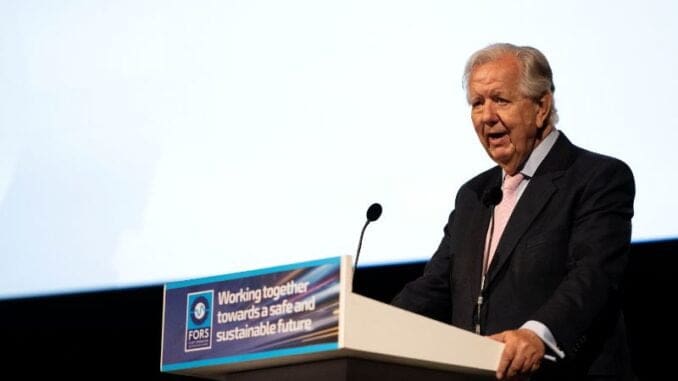 Green hydrogen is produced by splitting water into hydrogen and oxygen using renewable electricity, which Norris said JCB had “already invested millions in”.

“Their preferred product is the 3C which weights 17 tonnes and the batteries for an EV version would weigh about seven tonnes,” he explained. “So how on earth would you recharge that? And it won’t have the same capacity. So we need to find another answer for the heavy end of mobility.”

Norris said work was underway to produce a hydrogen product that is “completely green but also affordable”.

“We’ll see some really fascinating development as money pours into the idea of how we solve this,” he said. “Battery size will reduce, every single year. This will contribute to reducing our reliance on dirty energy. But green hydrogen is the real key because it can be water to water.

“There could eventually be a completely synthetic fuel,” he added. “At the moment there are synthetic fuels with lower carbon output but the hydrogen hasn’t had the carbon extracted. So scientists are now looking at a formula for something that doesn’t require carbon. Think of the prize.”

Turning to the challenging market conditions, Norris reminded hauliers that inflation had risen from zero to 10% in less than a year: “There has never been a tougher time coming for this industry and only the good and the efficient and the serious minded are going to survive,” he said.

“FORS plays an enormously important role in that. It’s important to remember you’re logisticians now. You’re not just hauliers. The larger companies recognise this – you’re in charge of every aspect.”

He added that haulage was no longer just about the price: “It’s important but increasingly it’s about ESG – environment, social and corporate governance. Environment and social are key issues in this industry. You need to be there and aware of local authority and public sector contracts. That will be a very big tick in the box. If you’re not there you’re unlikely to be working on government contracts.

“To me, that’s how society is evolving with the environment and how you treat your staff and the way you run and govern your business. If you don’t have high standards you’re going to be in trouble.”

Norris concluded by returning to the core conference theme of sustainability, saying the pandemic had triggered “extraordinary changes whose consequences are pretty much permanent”.

“That has massive ramifications for the truck industry,” he said. “It’s changing the whole pattern of city centre deliveries. Nobody knows how it will play out and it will be several years until it settles down. But one significant proposition has emerged in the form of connected autonomous vehicles – driverless vehicles. What will that do? Are we preparing for that? It will take a couple of decades but it will be really significant.”

Image by Ankit Choudhary on Unsplash

Discover more about our fleet and workshop management or contact us for a free demo.